Freedom of the city since the early 14th century. It flourished especially in the first half of the 17th century when it was owned by Albrecht from Wallenstein. Jičín was proclaimed a town´s reservation due to its sights. The Baroque chateau (there are a museum, a town´s gallery, a permanent exposition of the work of academic painter R. Pilář and Hall of Three Emperors there) and houses with arcades belong to the nicest buildings of the town. A battle of the Prussian and Austrian armies took place in the surroundings in 1866.

The characteristic silhouette of the town is formed by the Valdická gate (a three-storey tower from the late Gothic).
Its height of 52 m guarantees an excellent view.

Jičín chateau in the north-eastern corner of the square was originally the residence of Mikuláš Trčka of Lípa, and was rebuilt after 1608 by Zikmund Smiřický into a two-storey Renaissance chateau with arcades. In 1620, the chateau was destroyed by an explosion of gunpowder. During the rule of Albrecht of Wallenstein in the years 1624 -1633, a new early Baroque chateau was built. Today it houses the district museum and a gallery. The Church of St. James the Elder standing next to the chateau is the torso of the intended Bishop‘s cathedral, which Albrecht of Wallenstein decided to build in the years 1627-1634. A square with arcades of the ducal Valdická brána (Valdice
Gate).

A summer house called Valdštejnská lodžie is one of the most important cultural and architectural sightseeings of the Jičín Region. This suburb “entertainment centre” was built by Albrecht of Wallenstein between 1630 and 1634. A large preserve and a park invite you to have a walk there. 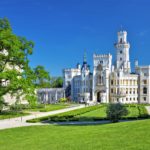 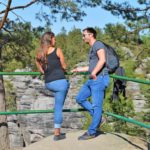